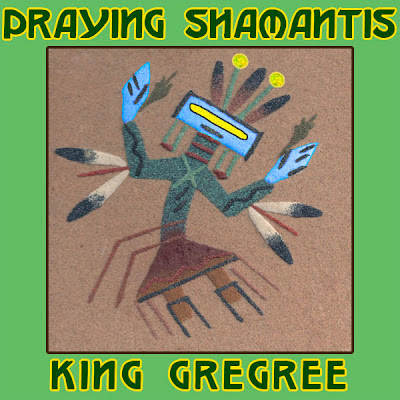 Pop through the Chrysanthemum,
the Praying Shamantis said “Come this way,
past the silver swaying branches of the Pine,
It’s time, Gregree” She said to me
as She devoured one of Her devout followers,
oh, how it screamed out not in pain but in gratitude,
I thought “isn’t it strange?” but I guess at this altitude
I just have to observe the laws of the land that I don’t understand
then She looked at me and said “It’s time we talk
about the Dreamtime Walkabout that you must take
but first, death you must taste,
that DMT you smoked, made you DOA
but don’t worry cause it’s been written,
I know cause I wrote it myself on the walls of the cave,
wait, I’m getting ahead of myself, let’s save that for later,
first, climb this ladder, a gift from the Satyr,
even Jacob couldn’t make this up, drink from the Holy Cup,
there’s a hole in your memory, this’ll sew it up,
soon the Cobra will help you know your soul,
roll the blunt of Truth for you are the L-U-C-I-F-E-R,
you’re Ē-L, the Star of the Morn,
product of the fornication of the Moon and the Sun,
the new Abaddon,
the tune has been sung
by the Owl Mother, hear Her hum the melody into Her feathers,
She looks above Her and there is none, nein, niet,
She is Nuit, ask Her to prove it, take your head and
unscrew it, which is just what you want for you are the outro of the whole canto,
Santa Maria Santería, in your dreams, She said “I see ya”
and I know you remember because I can read your mind,
I saw you awake in the Forbidden Den of the Sacred Lion
in a nest full of bones, Gregree is Home Sweet Home,
it’s time to take the throne back from Set and his minions
because the Earth is close to incinerating into oblivion,
O Vivian lifted Her wing from the lake,
take Excalibur from Her for all is at stake,
the lizards have the dial turned to “hate”,
they try to make you fight on their level
but you have a murderous Love, you are the Devil
that has the blessing of the Nameless,
that’s why you became this anomaly that you are
by the name of H-O-R-U-S, the truth is,
it’s hard to love and easy to hate in this place,
they saw the lay of the land and wished to lay it to waste,
so wade in the water, let it absorb in,
you must admit, the venom of the scorpion’s
got you writhing in pain because you’re dying
but this is the only way for when you awake, you’ll be reborn as King
but your crown is at the end of the Walkabout we talked about,
you must escape the dreamscape but your enemies
wanna stop you from getting away, you’ll need a miracle,
they’re gonna lay before you every obstacle
but if you succeed, you’ll meet the Oxbow Goddess,
they say it’s impossible for no one has ever stood in Her presence
but there has never been a need like this
for She knows of the medicine that can take the tide and turn it,
rip control from their grasp, the Asp bit the Hare,
don’t ask me now, ask me later,
the Akashic overlaps, pull yourself out of a hat of the top kind,
I’ve taken the Power and I’ve sopped mine up
with the sponge from the sea that was born before antiquity,
the Mantis was green, the Mantis was blue,
She abandoned ship before Atlantis
because She knew they were screwed,
a time before the first time ever recorded,
Eshu peeked from behind a Pine in the all important Forest,
getting carried away on the shell of a Tortoise,
have you ever seen a tongue as forked as this? I thought not,
“Oh no, I almost forgot” the Mantis said to me,
“a parallel is happening with everything you see
in dimensions unmeasurable where the treasure chests are always full”,
the Nevidi Crest in flight like an egret,
it contains the remains of the lost secrets of everything’s origin,
I know that you know that we are all Kin,
Anakin was based on a space lizard named “You”,
as I crack up these rattler bones and add them into the brew,
it’s ready, but know that when you take a sip,
out of your body, your spirit will slip,
now sleep the sleep of death
only to wake and face the test
*
Posted by Gregree at 10:03 AM