THE PRIMER [produced by: Triad BeatZ] 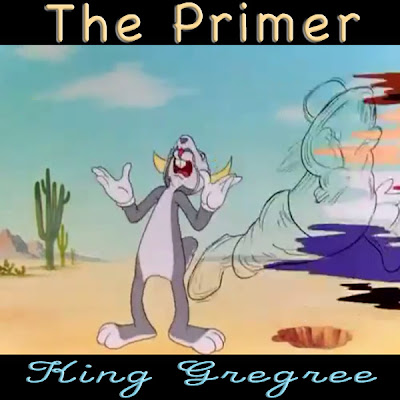 I open my eyes and right in front of me,
I see a midnight moon, beautiful as can be,
Hanging in the sky as huge as anything
and on it’s craterous face, the moving image of some King
rapping into a microphone,
No, this aint Kansas no more Toto,
I’m scared, I don’t know where I am, I’m cold,
I’m lost, deliver me from this shivering emptiness,
Then on a shimmering crest,
I heard a blazing wave of Light say my way
that since I left, it’s been an empty nest,
I thought to myself “WTF?!”
I’m just a hare from the Big Easy
who loves to eat and sleep
listening to the bluebirds chirping in the Trees
and then from the brush I heard a rustle,
Then out flew a Pterodactyl named “Tessel”,
He said “I’ve come to your side to guide the way,
no need to do this all alone”,
I said, “please tell me what’s the deal?
Are you even real?
Last thing I remember, I licked the toad,
My God, oh no, I must’ve overdosed”,
“Ho-ho Har-dee-har-har” laughed the dinosaur,
“You don’t even see the iceberg’s tip,
You’re in-between worlds for a reason
and let me tell you that it’s not to be dead
because there’s no such thing as death,
We are in the place of sacredness
in the secret forest’s hidden acre,
yes, it stretches out into Infinity
and it’s entirety fits perfectly
on the head of a pin with room to spare,
The only place where you get to be everywhere,
You think you’re just a woodland hare with a regular life?
That sounds really nice but you are Pan, Faun of Light,
The mask disguises the truth which to you is now being shown”,
“So what are you saying?
What is this of which you speak?
You want me to believe my life is a display case of fake tchotchkes,
I don’t know who you think you’re fooling but it’s not me,
I know who I am and it sure aint a pan full of light or whatever,
My life is hot tea by the fireside but the look in your eyes makes me shiver,
Your face is saying, “yeah I’ve heard this all before”“,
Then Tessel said “This is the test of Fortuna’s spoke” and then he spoke some more,
He said “My fuzzy friend, your life is an allegory of the most important event in history,
I’m catapulting you out of your comfort zone,
Unwinding your mind with the binding of the Pleroma Tome,
Listen close as I quote it, you should know it cause you wrote it,
“King Gregree” was and will be your title from a future long ago,
I said “Like hell, you should hear yourself,
Sounding like a little winged lizard
with the voice of an elf on helium,
Do you seriously expect me to buy into this?
No, I never will, not even if the price is free
because a life of obscurity’s fine with me,
I’m not looking to be perceived as Royalty
much less the King of Legend,
How could I even pretend to be Gregree, The Nevidi?
That has to be blasphemy and I’m not even religious
but He’s the one who said good riddance to the lizards
who murdered and ate our friends and family,
defiled and raped everyone’s dignity,
I heard what you said to me and I think you’re delusional,
You say I’m Gregree and your conclusion is about a simultaneous hologram,
Damn it, stop calling me “Holy Man”, I wanna go back to my rabbit hole,
I wanna get away, what is this place?
We’ve been talking for hours, is daylight ever gonna grace us?
I’ve been displaced, now I’m talking to a dinosaur,
Please forgive me if my mood is sour, Tessel,
I just need so rest so I can revive and relieve myself of you,
Who I truly believe is a figment of my fever dream,
This isn’t happening, I’ll say it again”,
but just then the Pterodactyl said:
“Give me your attention” in a changed tone,
It said “You are the hare of Ishtar’s feather,
You are the child christ King playing with some lucifers,
Lighting fires that burn like the Sun,
You are murdered and the killer, it all rolls into one
and I’m not being abstract, these are the cold hard facts,
You are the son of Abraxas,
Dear hare, you are the heir to the Akashic,
Trying to make you see that you
wield the needle with which Maya is sewn”,
“This is hilarious, you know that right?
I’d need to have the biggest ego to believe this tripe,
So find a new sucker cause you’re out of luck, why are you chuckling?”
Tessel grinned then said “It really is something,
You think you are just a rabbit, sick in his room
who licked the toad and now is sweating it out
and hoping to get well soon and hopping again,
This was planned to happen on this very night,
The left turn in the swamp, the chomp of the venomous bite,
The moon is a mirror, what you viewed there is you,
The Son, one of countless versions,
You’re no virgin to the truth,
We all swear to forget and then We get
thrown from the throne into the dungeon,
It’s a game we all play called “Remember Again”,
Do you recall when you were Pan
and the minx nymph, Syrinx you longed for long ago?
*
Posted by Gregree at 1:01 AM