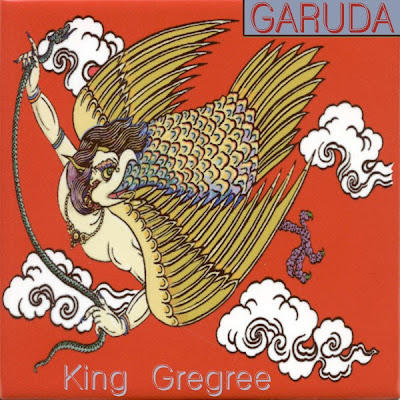 Burst through a cloud formation,
huger than every nation combined,
Garuda has awakened at the sound of mine chime,
this is the evolution of spells previously cast as
the new future dissolves into the past,
Garuda's wings flap, the beak snaps,
slurping up snakes like spaghetti strands,
all lands lay in Garuda's shadow,
you've polluted the shallows but
not the depths,
the Palace in the place unknown,
our Mother with the crescent crown wept within,
Her searing hot tear streams silver,
nows there's nothing where the hills were because
they all got swept away under the flap force of G-A-R-U-D-A,
the artillery is way beyond heavy,
y'all ready for this?
nope, I just answered for you, bitch
because you're just standing there s-stuttering while
Garuda keeps fluttering through the buttercream icing of the Heavenly mango sky,
the look of the scenery, a work of art,
Django Reinhardt playing an inspired version of "Stardust",
a black and yellow wasp buzzed in a cyclone code
about something Marduk confided,
sometimes to make things right,
false kings need to be smited
and we're rolling 'round laughing,
Golden Guardian Garuda is
far from being in a forgiving mood regarding
all of this whackness generating from your faction,
most of y'all have less than a fraction of a clue,
though it's hard to blame you,
so start chewing on this food for thought,
you ought to stop waiting and start hating the fact
that you're getting manipulated by the villain,
cook up your own religion,
well hell, at least you made it,
Oh what a beautiful Beast,
Garuda brutally feasts on the least worthy
of the harvest grain and then we spark the rest,
go up in flame but don't start
to cry if you have to burn,
you should get delighted for the privilege of being ignited for that means you'll be granted one more turn,
better learn this time or don't,
so do what you want
because every time you die,
you have a Crocodile chomp
awaiting for that hating ass,
you live by the bait and switch and all my Witches cackle cause
in their cauldron they see what Garuda's about to do to ya,
hey, good luck with that,
I've fallen and I've gotten back
up so many times that it's a-motherfucking ridiculous
but I can only win
and since Eve ate my peach,
your helix twists into the
Mothership Connection,
this Star-Child sends a snarling and riled Garuda to tear apart all cartels and hierarchies,
my Harpies start to feast,
the Archer dips the light arrowhead right in the river red,
Jack Sparrow is a code for the living dead,
I'm breaking bread as I boogaloo
and they'll be blue when I leave 'em bare like Baloo
but I gotta Swat Amadoo,
wipe the stripes off Sheer Khan,
Garuda flew into the future,
hot as hell and cool as the Fonz,
flapping in a craze,
set ablaze at such enormous scope,
and the sound opens many ways
that all lead to happy days, now dopeness abounds,
I'm Bacchus back with my crown,
Garuda smiles and frowns as it
flies to expose their lies
for they said I'd
never be alive again but that just isn't true,
so let me piss and poo on
your plan Set,
while Garuda rips off your head
and throws to me and I hacky sack it,
proving once again that you're still whack
and you can't fuckin' hack it
*
Posted by Gregree at 11:38 AM