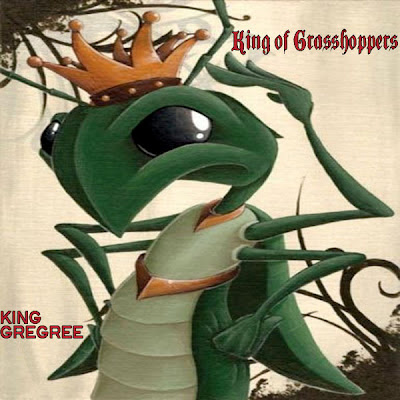 I’m the King of Grasshoppers,
I’m not Dennis, but your girl’s an easy rider and she’s on my penis
and I never stop when she wants to go crazy,
that chick’s a freak, maybe I should charge two bits
and show her off in the Carnival with the Chicken-Head Eating Geek,
come one, come all, your girly likes to ball,
I’ll tell ya’ what I mean, she likes my testicles laid across her chin
but don’t let me begin, I mean don’t get me started,
I killed that pussy but she gave it up to me, yeah, she martyred it
and I started a wheel in motion when into this dimension I stepped,
with the first rhyme that I spit, the hour glass was flipped,
I’m the horrible Horus-saurus Rex here to cast an everlasting hex
stronger than the one you’re under now
and you’ll thank me later, just don’t ask me how
You’ve been suspicious for the winter,
well, here comes the sun at last,
I’m on that grass and like Hopalong Cassidy,
I bring the heat, gun slinger six six six shooter
spits lyrical bullets that do tricks that you ain’t ever seen before
cause there is none as dope as I,
I Cobra Kai into a spin kick as Gregory sweeps the leg
and they shatter like little splinters,
just a demonstration of the demolition coming from my Demon Legion,
I’m the Dr. Dog, serious lesions form from the sickness,
what’s with this level of amazingness?
I’m setting the track ablaze,
I’m giving it it’s just deserts, it was fuckin asking’ for it,
now I’m gonna scorch it like a baked alaska,
take the dutchie, pass it on the left hand side
of the left hand path,
the only hope ya’ got left is my Wrath
When Gregree’s on the flow,
take notes like you’re stealing arpeggios,
that ass, I’m gonna break fast like Cheerios,
I’m serious, you’ve got a teary ocean pouring from your eyes
cause the fact you don’t stand a chance is what you’ve just realized
and when your girly stares into my eyes,
I send her into a trance, then she slurps my noodle
but this aint Lady and the fuckin Tramp,
it’s Lady and the Antler-headed,
yes, I’m Gregree,
there, I said it and I bedded down your Betty and your Veronica,
they’re blowing me like harmonicas,
I’m gettin head like yarmulkes,
not Yom Kippur but she’s a cum licker,
she’s says “yum, gimme more please”,
so in her face I bust a nut fatter than Dom Deluise
in his prime rib rotundness
and Eve was easy to deceive,
these Seething energies, ribbing to this day
like the rubber I used on your mother
while my dick was working undercover
*
Posted by Gregree at 7:40 AM