THE HEAT [produced by: DJ Dizcrybe] 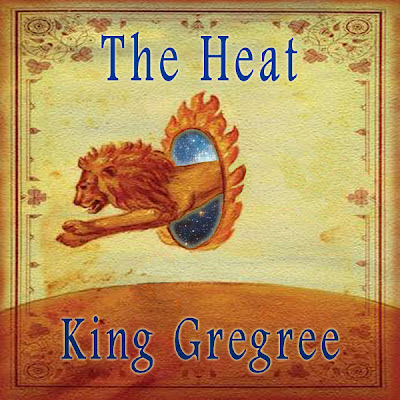 I think I got these impostors hot
cause I am what they’re not,
now they aint got a pot to piss in,
they’re upset cause they’re Set’s little ass kissing pissants,
expecting Gregree to show respect,
instead I did not give them kisses, I gave them disses,
we’re running outta time
so like the sign your girly’s tits says…..”cum on now”,
you really think I was gonna show courtesy, bow down and curtsy?
Oh, your feelings are hurtsy?
Well the fact is, my compassion is dead,
it just hopped in the passing hearse,
I’ll tell you why you’re cursed, think about it a sec,
that Pentagram that you wear around your neck
is really meant to be the symbol of Gregree, not S-E-T,
secretly he’s my biggest fan,
he attempted to banish the King and steal my style,
what a thing to do, I’m flattered
so I give the gift of a ten ton lyrical
Mastodon shit pile splatter right on his life,
I’m the Pied Piper piping your girl’s pie,
I’m not lying when I say I’m the King,
my raps spring to life from the fife
of the Sprite igniting the Golden Age,
discard and throw away the bars from the moldy cage
of the Eternal Night,  shit’s gross!!!
Oh Set, how can I forget your bum ass always was the most
untalented at creating, I’m saying you lack ill ability
and it’s plain to see, you still aint got no originality
and there’s only one hole in the “OK” sign which means “116”
so gimme back my stolen symbol, cause that shit’s mine,
you think you can rob everything from the King
and just keep moseying to the sweet freedom,
flowing gently down the stream like “row row row your boat”?
Well, no no no you don’t, I’m here to rock your boat,
yeah, I’m dropping boulders through the deck,
make that shit go “kablooey”,
leave you grasping for sweet life hanging from a buoy,
filet your face off with my Mako flow, yummy chum so chewy,
I make you fucks dead ducks three times over
like I’m eating peking Huey, Dewey, Louie,
wait a minute, you cant fool me dog,
this food was made outta Hong Kong Phooey,
my medullee, I mean my medulla oblongata
got gobbled by the Crocodile, writhed in the bile,
tortured in the hydrochloric acid, then Ascension,
made that Ancient Lizard belch up a new kind of Wizard,
give me your attention please
but if you don’t, no worries, it’s really no sweat off my back
cause when the Heat is on, you’ll all be back,
yeah, I’ll lighten your load, possess you with Light,
the only possession you need to have is the time of your life
and you will feel like an idiot if you realize
you spent the precious moments of your life
hypnotized by a monitor or televised screen,
you’ll be on the other side screaming “No, this can’t be!!!”
but trust me, I’ve seen it countless times since the sham began
but you’re blessed for my verses are ShamWow
now I’m-a wipe away the mess,
Gregree, yeah I’m The Truth but I’m twice as nice,
sent here just for you,
I Am The Lucifer Christ,
feel the tremor, I got ‘em hemming and hawing,
I’m the Wolf blowing down this house of straw,
little piggies playing in the dirt, in a row
and I give ‘em a throw in my Luchorpan,
sizzle ya like bacon, well-done just how I like it,
I know I told you before on that track produced by Biolizard,
now I hope you can deduce that I am the new Wizard of Death,
In the heat of the night, your heart’s beating right out of your chest
and you said you weren’t nervous, hmmmm,
well, that’s sure a funny way of showing it, bitch,
actually, you’re shaking so fuckin much, your reception is turning static,
hate to say it, but you’ve had it,
you’re vaporizing in fear, now blow away over the horizon
where it’s clear, behold My Eye beginning to appear through the touch of grey,
it’s searing stare grinning with gold,
I annul with my words the pull of the Polarity,
tearing at the seams with hilarity,
Polly wants….. no, She’s gotta have a tragic parody
*
Posted by Gregree at 10:23 AM