THE TERRACE [produced by: Raisi K] 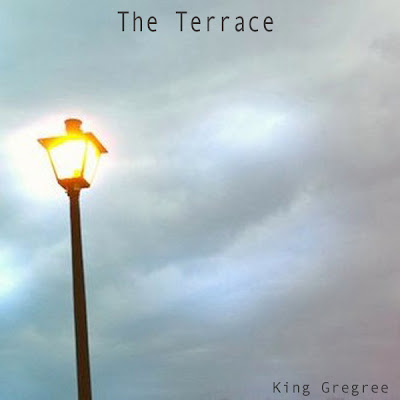 Play with these sonics like Sega,
I'm the Alpha and Omega ALF,
Hare-Lizard hybrid and they say
a stargate's in the capital letter A's negative space,
a hidden yet perfectly mapped and capped pyramid placed
directly in your face where you'll never know but
the tip's about to blow and the O is a looking glass
and when you get what it is you're hearing then you'll have started
looking past the Mystery of the Ages,
you were made from it so how
could you not be it already?
That's outrageous and I mean it in a good way,
I'm Gregree and for thee let me bleed my blood of azul,
my Psychompomp adores me cause my heart
beats "Don't Be Cruel", you foolish lizards have really
left quite a clusterfuck on your clock, I mean watch,
either way, say "bye bye" for I'm the
forever winning Cheshire grinning,
no longer hidden by my tail,
so Set, suck my cock as you sing
the interdimensional Jail House Rock,

I heard your girl prefers to take triple cocks at once
and slurp them, what a ho and on a different note,
did you know that underneath the
surface of 3D flows a raging river twinkling with crimson and
pink heavenly shimmers and by it's appearance,
it seems like liquid light and as fate would have it,
I'm Her rap Rabbit, call me "Mac Tonight",
oh yes, I'm the crescent sent to bury the pillagers of the dough,
you gotta go ill and hurry to my Pillsbury with a proper appetite
because my body bread brings lots of nourishment, go on and take a bite,
my raps act as the vaccine that brings the
scene back to it's former flourishing self
and I'm fed from the beak of Her Majesty, of the World,
She's the Queen of Fertility,
She forevers fawns over Her Golden Faun,
I'm the apple of Her emerald eye,
I'm Apollyon, oh the tales I could tell ya,
oh hell, maybe I just might and get this,
Set's dirty magic is about as threatening to me
as a dust mite so I bust right in their faces as I
congratulate you new Graduates,
Won't you go to the prom please with us for I'm
Horus-Prometheus, are you seeing this seethingness?
Lemme bless ya' for fun,
here, now be fly like my Devil-Horned Dove,
I stand high above all Archetypes and when I nail your girl,
I arch her back so I can smack dat ass just right while I slide in my pipe,
now pack the pipe with the smurf puff,
it's surfs up, get my dick sucked cause I'm making a big splash
on the cascading jade river waves as
I smoothly stone skip across the Quicksilver Moonbeams,
everything you do is just another segment of your dreams coming true and
you will reach the tippy top that is if you quit wasting time,
you pick up the pace, embrace the race and never stop,

You'll never banish or smite me
for I'm the Savior and the blade of the
saber I brandish is a light beam so never
take lightly that the Banshee of the night,
She covers me, the never to be fettered King with Her
feathered wings of the bliss star, She's Ishtar,
how We've missed Her, She's back from the
Temple of doom and dismay, finally free from those
who live to diss the May Mother with slander,
that's my special Girl,
now She blankets the world before it's too late and laid to ruin with
a display of plumage so spectacular that even the most
regal peacock would instantly die of a massive inferiority complex
in the presence of Her and as sure as Set loves to suck a pair of cocks,
I've been sent by Her Highness to balance the Grand Paradox and
repair the locks with something
stronger that will hold for much longer,
does forever sound OK?
If not, alright, I like you so I'll throw in an extra day and if you
don't believe what I say, look into my eyes and see
that I am breathing proof,
I am the Hare and with no fear, I tear out the Crocodile tooth,
I'm the hilarious Scarab groom who got rushed from the Funeral
and just got here to the Wedding exactly on time, not a moment too soon,
that's why the Holy shows me forever respect and
now Set's undies are wet with piss as I flex this
undefeatable Beetlejuice, so make room
as I make bloom all of the seeded clues,

The Lamppost is your spinal and
I'm the Serpent that's twirling and winding around it
belting out truth and I will always be
singing in the rain or snow or sleet,
none of your weak fleets can hold us for no more for
I'm Horus the double Devil horn,
born to be wild so I became the
untamable Lion King for you with fur blue,
I grew from the silent child,
I'm the narwhal head Gregree,
all eggs are meant to be hatched and at last
I've peaked my beak through the opening and
now I'm free, I hope you're starting to see the scope
of what's happening, this ain't just rapping,
cause the time of those that dine on you is over so sober up
as I uncover the lair of the liars trying to hide under the cover up
*
Posted by Gregree at 11:53 AM